Skip to content
Poem of the Week | Walter Bargen

When you’ve traveled this far
One rail loses sight of the other.
The steel doesn’t join in the distance.
Oaks no longer grow to tie
Their directions together.

A locomotive rears up then disappears
off the bridge over the Gasconade River
and all but the last car follows
into the mud of yet another river.

The iron horse stampedes and steams,
Shakes the earth, then the air,
cracking the moon’s reflection
shore to shore as it floats
on the muddy Missouri,
then severs itself from the riverbank
that was never meant to be reached, never meant
to be a passage, followed by the screaming steam
rising up as the engine
heads down, the steel wheels
turning one more time before locked into forever.

The lists are compiled, the dead and the wounded.
There are always lists for the living who try to comprehend,
though in the beginning not in any order. Only later
do we alphabetize our dead:
A. L. Chappell
Reverend A. Bullard
Cyrus Martin
Mann Butler
Reverend Mr. Teasdale
S. Bert, Fireman
Patrick Barry, Wood Passer,
Thomas S. O’Sullivan, Chief Engineer,
And so many more,
And no final number, 29 or 32 or 44 or more,
To solve, to resolve into meaning.
One body left at the Gasconade
Awaited identification,
Even as the list grew longer.
The dead always a final mystery.
So many lives shortened.

Then the next day John K. Fieldwent goes to search for his brother. He failed to cross Boeff Creek before the bridge washed away. When he did cross the river he continued in a commandeered hand car, holding the handle, pumping up and down, when his coat was caught in a steel wheel. He was thrown under one of its wheels running over his head.

Then the mourning, the eulogies, and the obituaries:

Robert Dubois, preeminently a quiet, unassuming gentleman, uniting feminine delicacy of feeling and with a degree of upright, manly determination that seemed almost inconsistent. . . as a man, he was honorable, as a friend he was ever true and faithful. “May the sod of this valley rest lightly o’er his head.” Born in Baltimore in 1818 he was 42 years of age. “though snatched from earth at a moments notice, he is now, we trust, enjoying that reward promised from on High, to the “just man made perfect.”

So many from passengers from St Louis, dressed in their finery, now torn asunder, so many households affected, the grief so great, so overwhelming, the mayor declares a citywide day of mourning, in sympathy with families and the dead. Fire, deluge, pestilence, has gripped the city before, but no calamity was so unexpected, so crushing in its immediate effects on a day set aside for congratulations and joy, not for disaster and desolation. November 4, 1855.
Some one hundred fifty years later, a dry terror
Still rattles the rails through these eroding hills.

parked on a side rail waiting for the mainline to clear.
The steel-ringed ladder to the top so inviting.
It’s tradition to throw one’s body into another

hoping to be carried away. Here they sit on rails
polished by mindless traversing, mimicking
the great river only yards away down

the rip-rapped embankment, its glistening surface
motionless in its wide stretch to the other shore.
A steadfast pair, rail and river, the immoveable

moving. The longing of a locomotive calls out
its intentions. The muddy water has its own
wandering to do. Rail, river, road, the turbulent

A few decades later, choking plumes of coal smoke,
glistening backs of sweating stokers,
glowing cinders falling on the gravel beds between
oak ties—a celebration of fire’s work and nothing
to celebrate but being on time.

In farmhouses and towns beside the tracks,
the days divided by the moon and moans
of warning whistles. The valley
thick with humidity and faces crammed into windows
coming up for breath, as a train worked its way
through stifling heat.

No. 4 south bound pulled to a sidetrack to let
the No. 1 pass headed for St. Louis, crossed the trestle
over Big River. A hard-scrabble farmer
waited to step the ties that were a hundred
little bridges for the steel rails. At seventy,
a veteran, he lived off his Civil War pension.
He’s stopped by something he hasn’t heard in years,
a muffled cry. Near the gorge’s edge, a dented valise
that fell from the train. He opens it cautiously.
Inside a baby wearing knit shirt, flannel
skirt, a wool scarf with ten small black
pyramids pulled tight over its face. The baby blue
from lack of air. For the first few years, unidentified
women came, sometimes spoke, sometimes not,
as if all mothers had thrown at least one
broken heart into the arms of a stranger.
Not the Gasconade train headed down into the river
followed by its many fatalities but a baby born of
the steady panting of a locomotive and trestle bridge
waiting to be derailed into another life.

Moored to the exposed roots of a cottonwood
that twist thigh-thick down the bank,
reaching for water, a half-century-old houseboat.
Steps down dug with a shovel
look more like the burrows of something wild,
now just a sliding fear of falling into heavy currents.
Leaves dried and curling, not yet fallen,
the sky’s blue dome uncreased by clouds,
sitting inside away from the cold wind,
invisible shadows channeled by river,
the rumble of a train passes beyond sight.

A father tells how the sheriff drove
into this river town that floods nearly every year,
and this year the streets were congested with canoes
though not the contents of living rooms, when a coal train
called in that children were on the tracks
waving their arms, running beside this mile-long leviathan.
Each child claimed innocence.

Out the window, the muddy current
courses over rip rap, the Corps’ rubble fingers
grasp nothing of the river.
A boat’s hull gently rocks a half-forgotten lullaby.

Another man tells how he and his son,
and a friend of his son,
were cutting down a dead century oak
on the ridge above the tracks.
He let the boys start a trunk rolling down
the hill. It crashed through the woods
to the bottom. The boys went to see
where it stopped and shouted back,
“It’s wedged between the tracks.”
He panicked. He knew they weren’t
strong enough to roll it away.
He threw a bicycle
in the back of the pickup, drove
to town to the railroad crossing.
He grabbed the bike
out of the back to find the seat
missing. Facing only a post,
he stood as he pedaled
over the stutter of railroad ties, thigh muscles
wanting to tear loss from the bone.
All he could think is that he didn’t have enough
insurance to cover a derailed train.
Around the bend from the trunk
he heard the warning whistle.
He threw the bike down and dove
into a ditch to wait for tons of steel
to come twisting and grinding over his head.
The whistle continued to wail
as he stared up from the wet earth
at the lumbering clank as railed wheels passed.
Minutes later his son and friend waved
from a slow-moving repair train.

Sunlight lifts off the river,
ignites the willows and oaks
on the far bank into a cold thin fire.
A dozen geese follow the river south.
A third man said he didn’t think there were trains
in the Dominican Republic. He rented a car.
This past summer he spent three weeks
driving through small towns
where chickens and children crowded the streets.
Waiting for a tire repair, careful
to drink only bottled water, rain fell
harder than he’d ever known it to fall.
He couldn’t see the buildings across the street,
but he knew their roofs leaked like the one
he sat under. A river rushed through the door
followed by a black sludge that settled
in a foot deep. The rain had gathered
up the dump and sewage and brought
it back to town. He and the rest of the café’s
patrons stood on top of the tables.
He bought two plastic garbage bags
from the man on the next table and six feet
of string from the woman sitting on the counter.
He stuck a foot into each bag and with the string
tied the bags to his thighs. His translator
jumped on his back and they walked
through the front door to the cheers
of everyone inside. They knew he was one of them.

And all those who died and were maimed,
as the many tons of locomotive swan-dived
off the Gasconade River Bridge,
the rail cars buckling, grinding,
metal wrenching, engine screaming,
steam erupting, bridge timbers splintering,
the rails that once knew a direction,
the engineer once knowing the way,
then the grief of others
trying make sense of it all,
we know they are all part us,
as we sit beside this river, the heavy current
picking up and adding to the sum of who we are
as the trains still speed past shaking the earth
and all that we are. 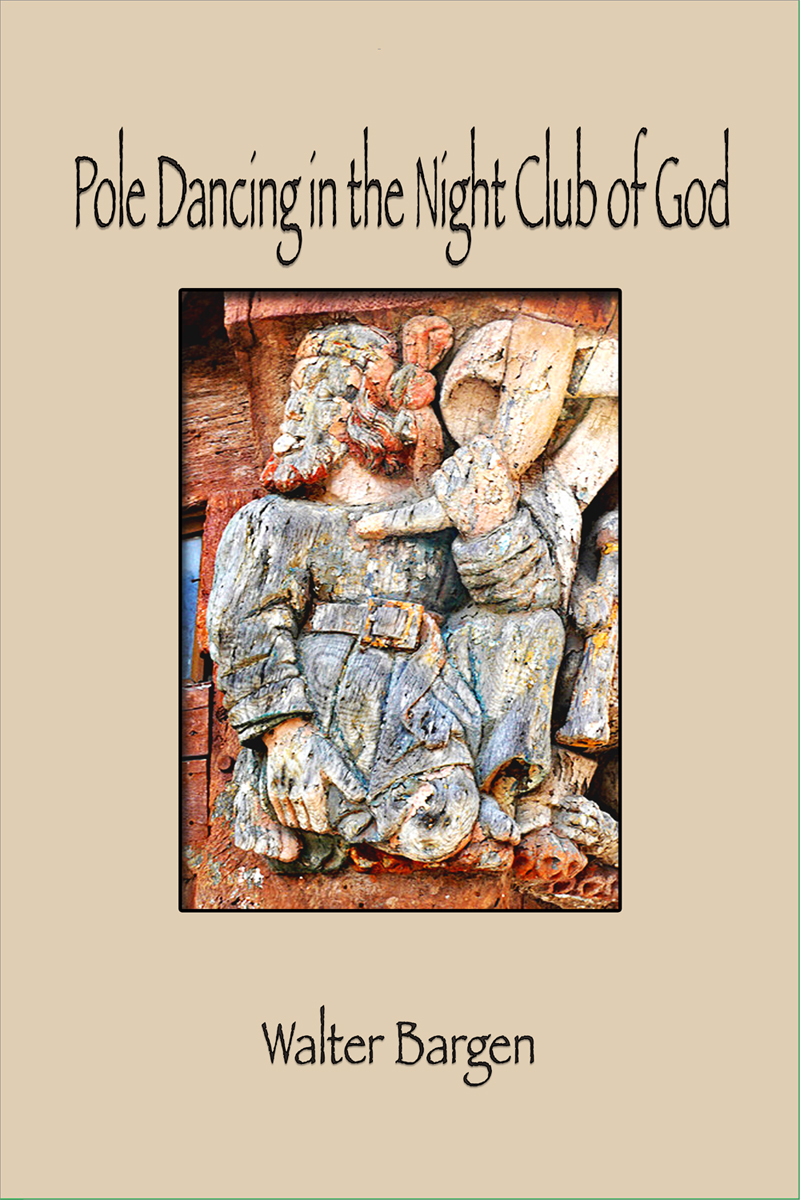 Walter Bargen |Pole Dancing in the Night Club of God|